What Does Justin Sun’s Business Card Say About the State of Crypto Gaming Nowadays?

The most recent niTRON Summit was held from the 17th—18th of January 2019 in San Francisco. The aim of it was pretty futuristic. The attendees, in response to the challenges which are currently taking shape in the world of blockchain, outlined the action they have to take in order to break down barriers in the industry. During the Summit, there was also a special forum held for developers as TRON seeks to realize blockchain’s full potential via dapps development. The forum was particularly focused on practical applications of blockchain technology like dapp / smart contract development.

Justin Sun, the CEO of TRON and BitTorrent, was one of the keynote speakers. The enthusiastic attendees who approached him got handed a personal business card with a cute figure on the front side of it. At a glance, the figure looked like an animated cat but on closer examination, however, it turned out to be a piece of digital art straight from an industry-rocking crypto collectible game.

Started from the Token

Digital art on the blockchain is usually represented by crypto assets with a set of special functions. This set strictly requires the non-fungibility of crypto assets. Non-fungibility is an important characteristic of tokens that give their holders undeniable ownership and proof of authenticity. Non-fungible assets are widely used in crypto gaming due to their uniqueness and individual traits. The cute pet pictured on Justin Sun’s business card happened to be a cat from the Blockchain Cuties game. In this crypto game, every digital pet is a non-fungible token. By the end of December 2018, the game released a TRON version and incorporated its proprietary TRX token. TRX tokens were immediately turned into fairy dragons, and Umka bears from the famous cartoon, and many more real and fantasy creatures.

In late December 2018, during the presale of TRON Cuties, Justin Sun got himself a fancy custom drawn Cutie, and he seems to have grown quite fond of it. Justin’s digital pet embodiment looks like a cheeky cat wearing pineapple sneakers and a T-shirt with TRON’s logo on it. His tail is rich and fluffy and probably indicates his behavior in battles. The individual traits of pets—like ears, tails, and eyes—are genetics puzzles that influence the characters in the game. 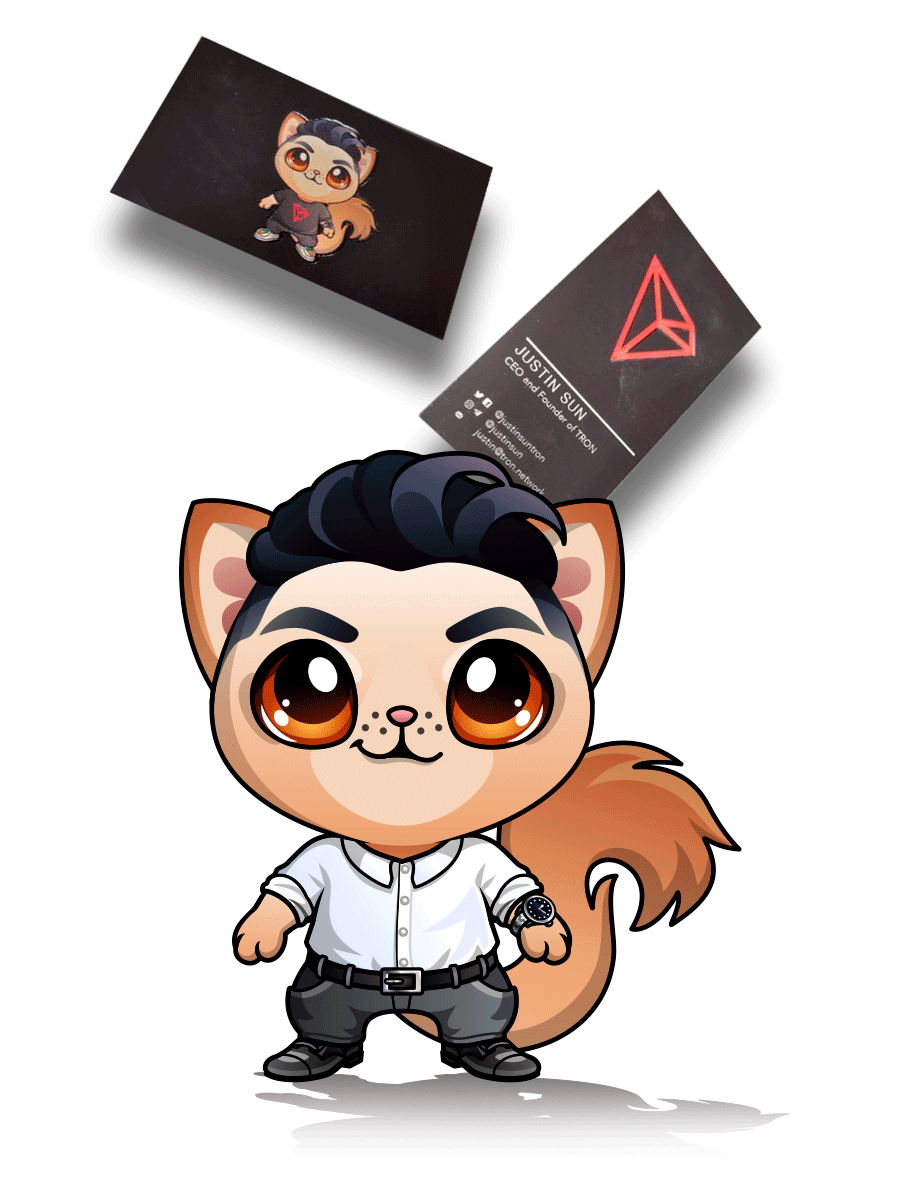 Justin Sun, alongside TRON, was the first one who dared to bring the concept of crypto entertainment to the table, stepping aside from traditional crypto trading. When TRON announced the core principles of their plan for blockchain domination, the Cuties team started putting together a prototype for future dapps development on the TRON blockchain. As a result, the Blockchain Cuties game ended up being the first fully featured crypto game on TRON.

Justin Sun serves as both a captain and a cheerleader for the team, as its success is very important to him.

Justin Sun’s character in the crypto collectible game reflects some current trends in the blockchain community. Like any other industry, the blockchain has its own tendencies and ambitions. Particularly aimed at reaching out to crypto owners, it has to encourage them to start using their tokens to their fullest potential. People, whether apart of the blockchain community or in general, are always looking for role models. The situation with Justin Sun’s business card reflected modern pop culture’s influence on the blockchain world. You may ask, how does that relate to crypto gaming in particular? Well, non-fungible assets can relate to anything—they represent historical figures, crypto celebrities, social media influencers and more. This diversity creates space for most player types, as everyone can find something for themselves, and make their little pets personal. Crypto collectible games with significant strategic elements like Blockchain Cuties reach many different audiences.

Did We Finally Find a Way to Mass Adoption?

The more the crypto world creates links with the real one, the better it is for mass adoption. Crypto is no longer an abstract idea of digital money, instead, you can actually own your assets. You can see them, play with them, upgrade them or even sell or gift when you’ve had enough. It’s exciting that you could shake hands with Justin at some crypto event and then suddenly meet his character in the battle playing a crypto game. Or you could follow a Japanese YouTuber and suddenly run into him in the game as well. Plus playing crypto games on TRON provides players with lower costs and faster transaction speeds which makes players loyal to the games and the platform.

Mature Crypto Game Market or the Best Is Yet to Come

There is a belief that within 3 to 5 years the blockchain will become mainstream technology thanks in no small part to crypto gaming. Let’s talk in numbers—in 2 years some major regulations regarding cryptocurrencies will come into force, which will make the cryptocurrency market (including crypto games) a safer and more crowded place. Traditional gaming companies will start to enter the market in 1.5 to 2 years time, and this will bring a lot of healthy competition.

2019 will bring increased attention to crypto gaming from venture capital firms as well as from various crypto funds, but this attention will mostly be spread among experienced players with good track records or working products. There’s no turning back from that, and Justin Sun knows it. 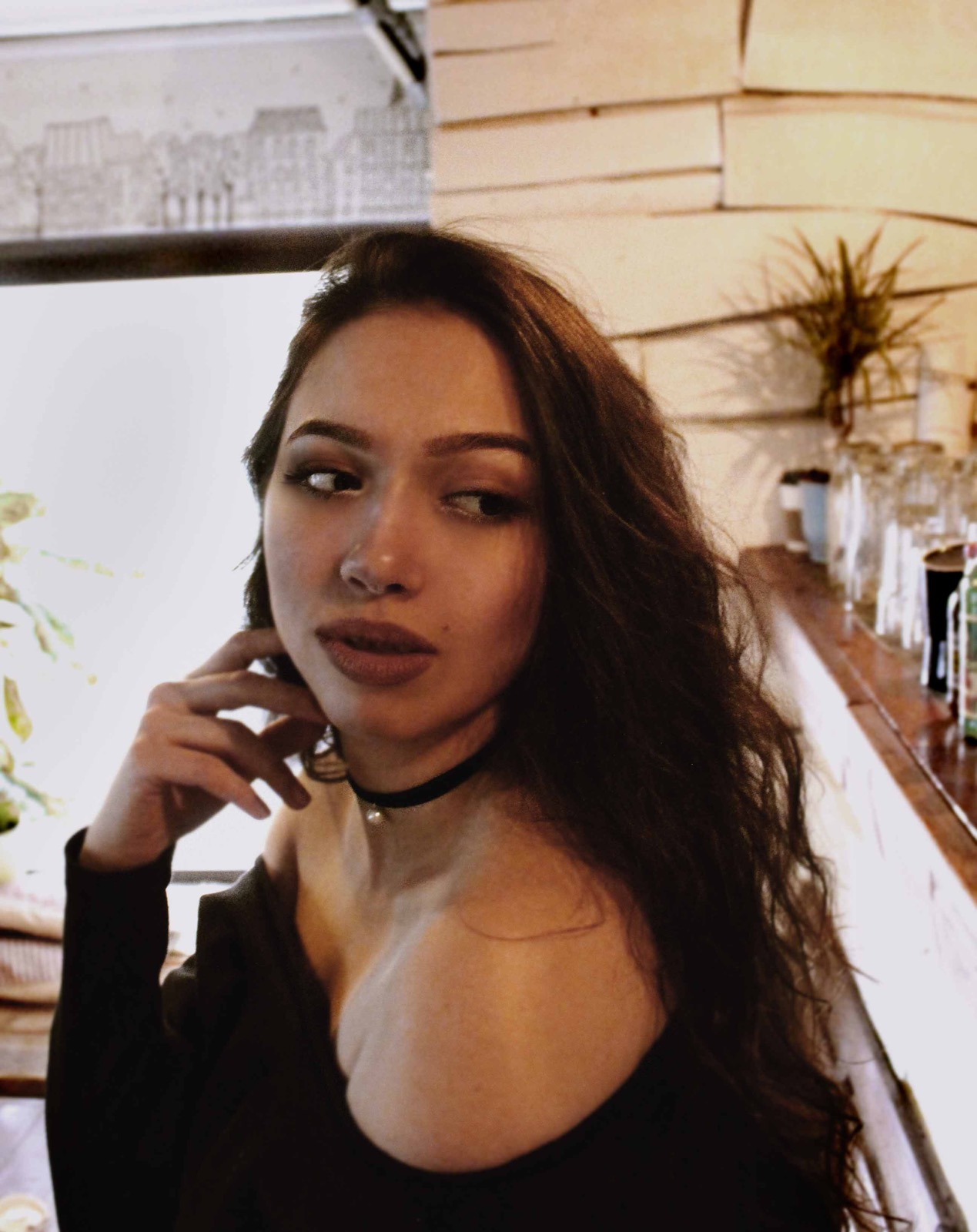 Lily Kuvardina
Lily Kuvardina is that one girl on the block.
Like
Like this Article
Currently there are no comments for this article. Would you like to be the first to write one?
Tags
Recommanded Articles
[Doctor Dapp] A Beginner's Guide to NFTs
Jul 20 · 2760 Views
Travel Or Stay, You Can Earn From Your Activities
Jul 21 · 2755 Views
Disappointed at Ballon d'Or Cancelled? Have Fun With Sports Dapps
Jul 22 · 2315 Views
Dapp.com Forms Exclusive Partnership with Opera for its New Dapp Store
Jul 24 · 3505 Views
< Notifications
Homepage
Topic
New
Dapp Ranking
DeFi Ranking
Market
Buy Crypto
New
Register
Log In